So You Moved to Vermont: Jake Hughes of Widewail 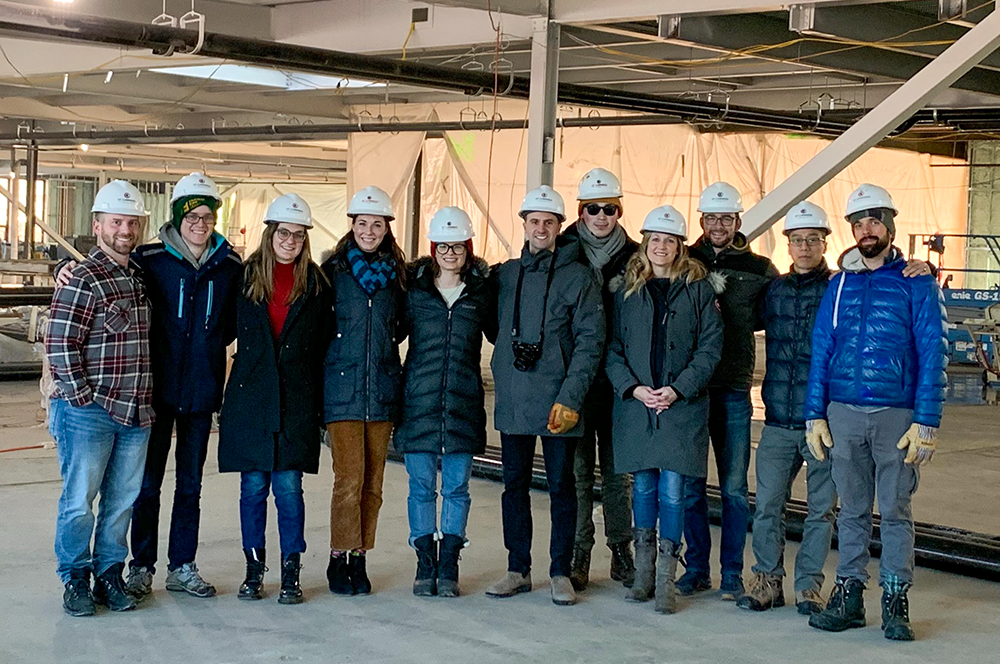 Recruiting qualified candidates is a challenge for growing Vermont businesses. On the other hand, young professionals have indicated that identifying worthwhile job opportunities in Vermont is a challenge of its own. In a series of interviews, I will explore this disparity through firsthand accounts of what it was like to relocate one’s life and career to Vermont.

In this first installment of "So You Moved to Vermont" I interviewed Jake Hughes, the Marketing Manager at Widewail. Widewail is a technology-enabled online engagement management agency that will soon be moving to Hula. Native Vermonter, Matt Murray, founded Widewail, the Burlington-based company in late 2017. Today, they focus on scaling customer service and digital engagement while improving local SEO, customer loyalty, and satisfaction. In late 2020, the Widewail team aims to arm local businesses with the tools they need to create organic, local engagement through social media.

Nearly 5 years after starting their careers in Boston, Jake and his wife, Kate, moved to Vermont in the fall of 2019. Though they grew up in New Hampshire and Massachusetts, they have family that currently lives in Vermont. Like so many of us, Jake and Kate moved to Vermont to be more connected to the outdoors and the mountains. Jake and I chatted for over an hour, which translated to 11 pages of text. In order to relay unabridged conversations, the next installment of “So You Moved to Vermont” will be coming to you in the form of a podcast. Without further ado, here’s my (redacted) conversation with Jake Hughes:

CP: So you moved to Vermont, tell me why.

JH: For Kate and I, the goal was always to settle down somewhere other than Boston. We moved to Boston because we were trying to get our careers started and Kate went to grad school there, but our goal was never to live there longterm... In September of 2018, we were driving back from hiking in New Hampshire when we agreed we should just do it. We should move now. It took a year to execute on the idea, between figuring out where we wanted to go, starting to network, getting jobs, and ultimately moving.

CP: Is it fair to say you were looking to move somewhere more rural?

JH: Somewhere less busy. Somewhere with more community. Somewhere closer to the mountains, with better access to outdoor activities… We enjoy the city, the good food and the culture, but a lot of our time was spent traveling to New Hampshire or Vermont for the mountains. Also, my commute was about 40 minutes and Kate’s commute was 40 to 60 minutes. Now, Kate has 2 hours of her day back that was previously spent driving.

CP: When you moved to Vermont, did you have jobs lined up or did you move first and then look for jobs?

JH: I didn’t have a job lined up, but Kate did. I had two freelancing gigs to hold me over, so I was never without work. It’s not really my style to move somewhere without a job, but getting a job wasn’t easy until we were up here. It was very hard until it was very easy. There was a moment in May when we weren’t sure we were going to be able to make the move because neither of us had jobs and we weren’t gaining a lot of traction. Kate landed a good job in Burlington in June, so at that point we were definitely moving. I started my job search in February. I applied to 25 jobs between February and July and had 23 networking calls. I networked for about 6 months prior to moving, and I was able to get a job within 3 weeks of moving up here.

CP: What were some of the platforms and resources you used to explore job opportunities here?

JH: Pretty much just LinkedIn. I would check job listings in VTDigger and someone recommended I subscribe to the Vermont Tech newsletter. I found VCET to be a helpful resource for identifying start-ups in the area. Basically, I had some network connections that led to opportunities. Lori Smith, the Executive Director of the Vermont Futures Project, was my mom’s college roommate at UVM. Lori knows everybody. Through Lori, I was able to make helpful connections.

CP: Do you imagine the process of finding a job would have been more difficult had you not had that connection to Lori?

JH: It’s hard to say. I found that everybody in the business community was willing to help. There is a sense of wanting to do your part to promote Burlington and connect experienced professionals who want to move here. Everyone answered my emails, everyone was willing to make introductions. In terms of networking, it’s a very proactive community. I actually feel more connected in terms of a business network here than I did in Boston.

CP: Even though you’ve only been here for a few months and you were in Boston for years?

JH: Yes, I’ve made more progress here in 5 months than I made in 5 years in Boston.

CP: Wow… From Hula’s perspective, we are constantly hearing that recruiting and accessing talent is a barrier to growing companies here. At the same time, we are hearing from individuals searching for jobs here that it is difficult to identify opportunities. I am really interested in exploring that disconnect. Now that you are here and working for a growing company, what are your thoughts on this?

JH: It seems to be a timing issue. If there is a hiring need in Burlington, there is generally a strong need to fill that role. If you’re looking to enter the Burlington market, you need to go into it with a 6 to 12 month window of time that you could be available. There are plenty of opportunities here, but jobs become available intermittently. At Widewail, we recently made a few hires and it was not difficult to fill those roles, but those positions were more entry-level. Moving up here, Kate & I didn’t have any student loans, we had savings, we didn’t have kids, we’re renting. If you have a family and need to sell your house in Boston in order to move up here, it’s more of a challenge.

CP: That’s interesting because I think a lot of people are in the same boat as you--they want to leave the city and move to Vermont before starting a family. I’ve heard the argument made that the solution to our workforce supply gap is through retaining graduates, and that more of an effort needs to be made to not lose graduates to bigger cities in the first place. But, a lot of job opportunities in Burlington are looking for a level of experience that recent graduates couldn’t possibly have.

JH: I think there is more trouble with higher paying and higher skilled jobs. There aren't a ton of those jobs, and that does make it difficult to move here and continue your career. On the flip side, I think it would be very difficult to start your career here and build wealth here. There seems to be this income disconnect, because a lot of the wealthy people in Vermont made their wealth in New York, Boston, LA… and then moved back for lifestyle. You have to be quite entrepreneurial to start from scratch in Burlington.

CP: Definitely, those who are coming here from New York, Boston, LA have to be willing and able to make a financial sacrifice in exchange for lifestyle.

JH: Kate and I have definitely changed our lifestyle for the better. People talk alot about how expensive it is to live here, and it is if you’re starting from scratch. But coming from Boston, our rent is 15% cheaper and the quality is much better. We are living a healthier lifestyle with less excess, and it has been good for our mental and physical health.

CP: We advertise Vermont as a place you move to live a healthier, more balanced lifestyle. It’s sad that in order to do so, you need to be in a place of financial privilege. If we want graduates to stay here, we need to create more opportunities for them to grow--otherwise they need to go to Boston or New York to establish that financial foundation.

JH: I feel like we are doing that at Widewail. We hire entry-level positions and most of our recent hires have been local, or young people that are coming back. That’s always been Matt’s directive. He wants Widewail to be part of building a Burlington that is a viable place to start and grow your career. I think that Hula is going to be a beacon of energy that will drive that change. Kudos to Russ and Rob for making that happen. I am certainly excited to be working in a place with that kind of energy. You need to be proactive to get the most out of the Burlington business community, there is a lot of success happening here. Personally, I feel like I have more agency in the work I am doing now--a bigger fish in a smaller pond. There isn’t as much opportunity here for the more niche careers, like what I was doing in Boston. By moving up here I was able to broaden my focus and I think long-term that will put me in a better position.

JH: The challenge of the start-up culture is that the success stories--the companies that were sold to bigger companies--they don’t seem to do as well once they’re acquired. They’re still here, they’re well-funded, but the culture changes a lot. The realities of running a business in Vermont clashes with the demands of running a national company. This could potentially motivate large, out-of-state, parent companies to downsize or relocate. If there was a wave of layoffs in Burlington, there’s not enough places for all those people to go. If TripAdvisor were to leave Boston, all those people would find other jobs relatively easily. Can you imagine what would happen if Dealer.com left Burlington? Widewail aims to grow into a mid-size, foundational Burlington company in the next 5 years.

CP: I think you hit the nail on the head, the Vermont culture does clash with corporate culture. What advice do you have for Hula as we work towards our mission of growing opportunity for businesses to grow and thrive here? What could Hula have done to aid the process of finding a career in Burlington easier for you?

JH: Hula’s existence, fundamentally, is a huge step forward period. Hula could act as an intermediary to bridge the timing gap. Hula should go out to other markets, make their presence known, and be a resource where people can learn more about the Burlington business community. Hula could be the source that grows the pool of talent, that keeps people engaged, interested, and connected to opportunities.

CP: We want to grow an ecosystem where business can thrive, so I really appreciate your time and insight. It is really helpful to understand the challenges professionals like yourself face when relocating here… For anyone that might be interested in moving here, let’s end on what you love about living and working in Vermont.

JH: For me and Kate, moving to Vermont has removed so many of the distractions that took away from living a happy and productive lifestyle. It’s an entrepreneurial town, in my career I’ve learned new skills and found new opportunities. The outdoor side of things has been huge for health and happiness--I skied 46 days this winter. We are surrounded by people who are working to enrich themselves and the community at the same time. For me, Matt really embodies the Burlington success story. He’s from the area, he progressed up the ladder at Dealer.com, and now he’s starting his own business that we hope will become a cornerstone of the Burlington business economy. We are a Burlington company, but we’re competing on a national scale.