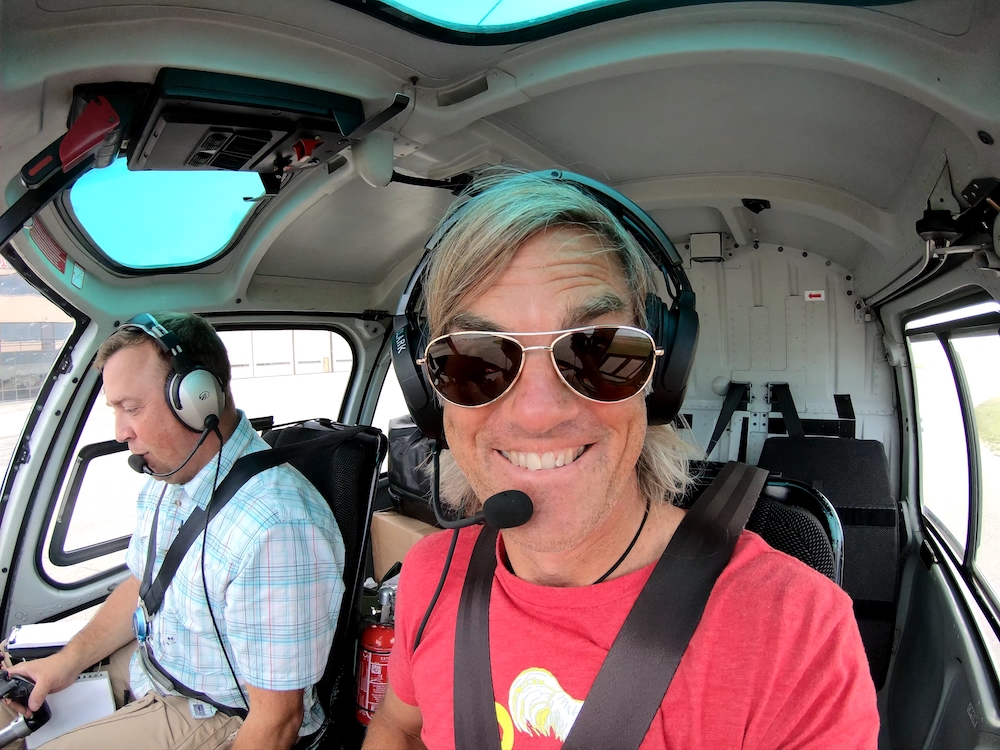 It was Sunday afternoon and I was strolling back to the house when I saw my neighbor out front and eager to chat. "Hey, I'm flying to the west coast tomorrow to purchase a helicopter for Beta. You should come with me". He told me it would be helpful to have me along for the company and to share in some of the flying. This little discourse between us was not very indicative of the types of conversations we have in our sleepy little neighborhood on South Cove Road, but this was not your average neighbor.

Nick and Cheyanne moved into their house a few months prior and I became a quick study. Nick is one of the most highly trained helicopter pilots in the world. He was one of ten Marines recruited, and ultimately selected, to fly the president of the United States - one the most trusted assignments in the Marine Corps. After finishing his career in the military he found his way to Burlington and quickly joined the ranks of the Beta team as a test pilot for their electric vertical take-off and landing (eVTOL) project. If you haven't heard of Beta, you will soon. They are without a doubt one of the most exciting technology companies in the world right now and growing rapidly.

It is important to know that at this point, I didn't know the first thing about flying helicopters, but that didn't concern Nick in the slightest. "No worries, I'll teach you en route. It's easy". A few days later I jumped on a flight to Chicago and met Nick and the new A-star Helicopter at the Midway FOB for what would be the quickest 180 turn I've ever made at an airport.

It turns out that flying a helicopter in a straight line is actually quite hard to do. There are only two primary controls both of which look deceivingly intuitive if you've ever played a video game. The cyclic is the joystick that comes out of the floor of the cockpit and is the controller that gets all the attention in the movies. This is the stick you swing to change altitude, adjust pitch, fire missiles, etc. The collective looks more like the hand brake on your car and provides power to the main turbine. Fortunately I didn't have to focus much attention there as it took all my concentration to manage the touchiness of the cyclic. "Ok, so you just climbed 500 feet in the last 30 seconds", "What?!? Really?!?"

We flew at 2,000 feet along the southern shores of the Great Lakes, touching down in Cleveland and Rochester to re-fuel the chopper and give me time to boot-and-rally for the next leg. Even with perfect weather, and almost no wind, my equilibrium was a mess. I was fighting hard for the eight hours of flight time to not puke in Beta's new aircraft.

We made our approach to the foothills of the Adirondacks and quickly climbed to 5,500 feet to clear the summits. Seeing the majesty of the Champlain Valley from the eastern side of the Adirondacks was the highlight of the trip. Both of us were blown away by the beauty of this special place we get to call home. Passing over a hand full of larger lake-front cities between Chicago and Burlington it became abundantly clear that companies have plenty of options when it comes to establishing their headquarters. How did Burlington become the host to Beta Technologies? Granted the founder grew up in Vermont and ultimately returned to Vermont to start his business... but why here? I think it boils down to an emotional attachment to a place and a commitment to its prosperity.

The Hula team was integrally involved in helping Beta with two big raises during their early years. In the first raise, we were looking for $5-7M from the local investment community. Rob Lair turned stones, shook branches, and managed to schedule a few strategic tours of the Beta facility with a solid stack of hopefuls. We were making progress and getting huge validation from our investment community in the potential and uniqueness of this amazing, young company. Near the end of the fund raising window we lined up a big meeting with a well known investor from the community. Rob suggested I be there as a representative of Hula and one of the initial outside investors in Beta.

The night before the meeting I was out on a sunset cruise on my efoil taking advantage of the warm summer air and super glassy conditions. A small zodiac caught my attention as it turned and started to speed in my direction. As the driver approached, he killed the engine and stood up holding his phone in a manner that could only suggest he was trying to film me as I glided by. Not being shy for attention, I coasted in a little closer and started spouting factoids about the efoil, anticipating the FAQs that generally come from anyone seeing this beautiful piece of machinery for the first time. "Its fully electric and can go 20mph for up to an hour and a half on a charge! Its all controlled from this wireless remote in my hand! Cool, right?!" I spun around his boat a couple times, got an affirmative nod from the on looker then we parted ways.

The next day I walked into Beta to meet the person that would hopefully become our next big investor. As Kyle started with the introductions, this person politely interrupted stating that we'd met before. "We have?"..."Well yes, isn't this you on the hydrofoil last night?" Small world stories like this one are what make this community so damn special. Where else can you make these kinds of connections both in and outside of the boardroom. We all live here by choice and we're reminded constantly of the value that Burlington brings to our lives and lifestyles. What better place to work and play than one that continues to attract great people, entrepreneurs, investors, and start-ups? Granted it's not always as rosy as this little story might lead you to believe, but if you put yourself out there and look for opportunities to get engaged with the community, good things will come. I've learned that lesson countless times now and it just keeps getting better. Thank you Kyle Clark and the entire team at Beta. You guys are brilliant, you're doing amazing things that will change the world, and you're doing it in your beloved home state. I can't wait to see it all unfold.