Legends in our Midst 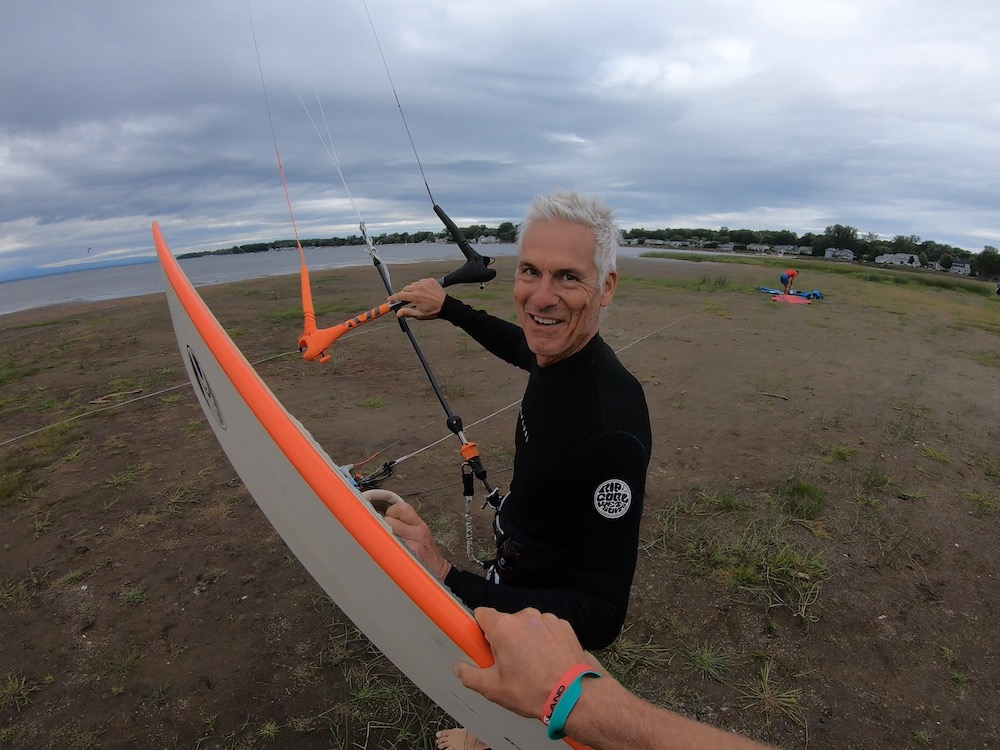 Things started off with a simple form submission requesting information about some artwork I was interested in purchasing for Hula. Was I stalking or was I genuinely interested in the work? A little of both I'm sure. It's fair to say I was certainly looking for an angle to meet this legendary waterman, but I was equally intrigued by his artwork and knew it would work well with the vibe we were creating down at Hula.

I received a follow up email that led to a phone call to talk through the details of the order. Most everyone who knows Pete Cabrinha knows him as a professional athlete and the founder of Cabrinha kites - one of the best known brands in the kite surfing industry. But I had made contact through a side door appealing to Pete's side hustle as a graphic designer. I've always been in love with graphic design and immediately connected with Pete's Hawaiian-influenced collages.

The conversation about art and Hula transitioned to Pete's background as a 5th generation Hawaiian, raised on Oahu, and his beginnings as a professional windsurfer. I switched hats during the call and began interviewing him about the twists and turns that took him from athlete to entrepreneur. I had been working on an article at the time for the Standup Journal about how the geology of each Hawaiian island shapes the type of athlete that comes from each atoll. Pete's story fit perfectly into the theme of the article and ultimately landed on the pages of our Summer 2019 issue.

I was collecting photographs to run with the story when I came across an image of Pete and his family sitting in his home studio. The bookshelf over his head was stacked with all kinds of interesting titles including one that was very familiar - The End of Print by David Carson. Ah, so Pete's a David Carson fan. That's good to know. I've known David for quite some time (another fun story) and he had asked me to help publish his latest book - Nu Collage and handle the distribution. I quickly packaged up a copy and sent it to Pete with a note explaining that I had seen a different Carson title in a photo from his home. At this point he had to think I was a full on stalker or super fan - not sure which is worse. Regardless, the book was received with much appreciation and Pete ultimately asked for an intro to David. I'm certainly looking forward to how that collab manifests itself into some insane kite graphics.

What I didn't know at the time is that Pete was doing his homework on Burlington. It turns out that his daughter was a high school senior and very interested in applying to UVM. The universe had connected the two of us through a mutual interest in Burlington. Was he surprised by the random coincidence of receiving an email only a few months earlier from a guy in Burlington looking to buy some artwork? Clearly the universe was at work giving both of us a little of what we needed. With a college-aged kid myself, I can relate to how difficult it must have been to consider a school that is 5,000 miles from home. Having a friend in the area could be a huge help.

Some time after the artwork arrived, I had it stretched and put on display at The Spot on the Dock until the pieces were ready to move to Hula. One day in the middle of August I received a call from Pete stating that his daughter had been accepted and would be enrolling at UVM. The family was headed to Burlington at the end of the month to start the semester. I was blown away. Pete is coming to Burlington. Time to build an agenda that included a ton of time on the water followed by some tasty fish tacos to make this crew feel at home.

Once Pete and his family were finished with their quarantine, they made it down to Hula for a tour of the buildings and the Surf Club. Fortunately the wind was cranking that day and there were a ton of windsurfers, kites, and wings out on the water making us look like the Maui of the East. We did a quick stroll through the Surf Club grounds as Pete snapped photos and made claims about how unique the space felt. One of the most respected watermen in the world was here at the Surf Club and was genuinely impressed. I was buzzing.

Once we'd seen enough of the outside, we strolled into building 44 and that's when I heard and felt the sighs from Pete's wife and daughter as they caught a glimpse of Pete's collage hanging on the wall beside the conference room. I'm sure the sight of that painting made them all feel a little closer to home.

Once Pete's daughter was settled into school and classes were underway, Pete still had a couple days to play before heading back to Maui. That's when the long awaited water agenda began. We started with some efoiling at the house which allowed me to be the first to introduce him to the joys of electric hydrofoiling. It was no surprise that he picked it up quickly and before long was leading me out to the broad lake to chase down and ride the growing wind swell.

That same wind later developed into a full blown southerly which gave us a chance to head up to Delta Park to kite with the local crew at our favorite spot. I tried my best to stay cool as we rolled up to the beach amidst a huge crew of kiters with one of the fathers of kite surfing in tow. It didn't take long before heads were swinging the murmurs of "Is that Pete Cabrinha?" started filling the air. Pete was quickly surrounded by other super fans all spouting stories of the first Cabrinha kite they owned and showers of gratitude for creating the sport that changed their lives. It was a proud moment for all of us. It's not often that we have a legend in our midst to share in the stoke and the spirit of the sport we love.

As soon as it was clear that Pete wasn't going to get a break from the fanfare anytime soon, I sauntered over to our gear, pumped up a 10 meter Switchblade, and handed him the bar. "I'm sure everyone here would love to watch you do your thing!"

After three weeks of not kiting in Vermont, it was time for Pete to hit the waters of Lake Champlain and put on a show - and that he did. That session will go down as one of the most memorable that any of us could ever possibly claim. Pete was finally able to experience Lake Champlain while riding and flying the gear that he himself created and was all smiles in the process. After about an hour on the water throwing big airs, back rolls and strapless tricks, he landed his kite then walked back into the water to shoot photos and videos of everyone else as they buzzed past him throwing shakas and smiles. Suddenly the distance between Maui and Vermont seemed negligible. Vermont was feeling like home and the Aloha Spirit was in full effect.

Every time we have the opportunity to host the kind of influencer that can only be helpful to our continued growth and success, we owe it to ourselves to make sure they leave here as evangelists of Burlington. I'm always proud to show off our town and I feel a strong sense of satisfaction when my heros depart with a deeper understanding of the beauty and values that make this place so special. Playing host to people like Pete and making sure they experience Burlington in the best way possible is the most fulfilling part of my job at Hula. And man oh man do I love my job.